Comparison of the Effects of Nebulized Terbutaline with Intravenous Enprofylline in Patients with Acute Asthma: Materials and Methods

The following drugs were used in the study: sterile solution of enprofylline 10 mg/ml and a matching sterile placebo solution (saline); the terbutaiine was in the form of Bricanyl 1 percent nebulizer solution together with a matching placebo nebulizer solution. The enprofylline was administered in a dose of 0.2 ml or 2 mg/kg, made up to 100 ml with normal saline solution at room temperature, via a burette, over 20 minutes. One ml (10 mg) of terbutaiine solution was made up to 3 ml with normal saline solution for administration via a Hudson nebulizer and a face mask using a flow rate of 6 L/min of oxygen for ten minutes. Patients were stratified for age (less than 45 years, and 45 years or more) and treatment allocation was randomized into blocks of four using a computer program. A double-blind technique was used so that each patient received simultaneously both an… 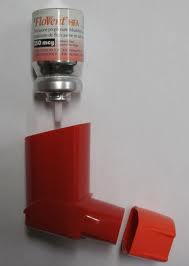 Our results are close to those published by Thung et al. These authors found Vo2resp to be 13 percent of Vo2tot in patients studied after cardiac surgery. Higher values have been reported by Wilson et al in the immediate postoperative period of cardiac surgery. In patients with various degrees of cardiorespiratory diseases, Vo2 resp was found three times higher than that reported in the present study2 (8.7 vs 2.6 ml OJh of ventilation). This is related to the underlying lung disease which is associated with an increased work of breathing and/or a decreased efficiency of the respiratory muscles. 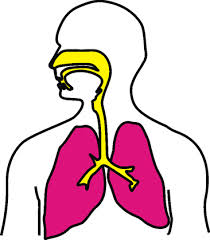 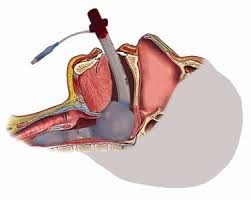 This study confirms that endotracheal tubes and a ventilator demand CPAP system can markedly increase the inspiratory work of breathing. The additional work rate (Wi/L) due to these added resistances increases with increased flow demand and decreased internal diameter of the tube. Pressure support can be used to compensate for this added work when the level is adjusted for the endotracheal tubes diameter and mean inspiratory flow. The effect of the endotracheal tubes size on airway resistance and work of breathing is substantial. Bolder and associates2 have reported that every 1-mm decrease in the endotracheal tube s diameter results in an increase in work of 34 to 154 percent, depending on the respiratory rate and tidal volume. In the mechanical-lung phase of this study, our findings were similar, with each 1-mm change in the tube s diameter resulting in a 67 to 100 percent increase in Wi/L. The effect of… 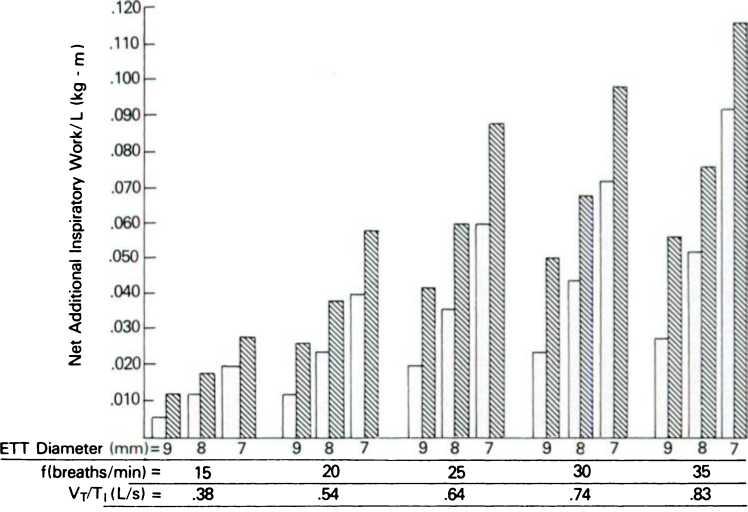 Mechanical Model The net added inspiratory work (Waw) increased progressively with decreasing size of the endotracheal tube and with increasing Vt/Ti (Fig 3). Each 1-mm decrease in the tubes diameter resulted in a 67 to 100 percent increase in work. Adding the ventilator circuit increased the work further. The proportion of added work due to the endotracheal tube alone, when compared to the added work for the tube and ventilator together, was a function of the tubes size. On average, a 9-mm tube contributed 50 percent of the total added work, with 8-mm and 7-mm tubes contributing 60 and 70 percent, respectively.